Blue LS/T56 from PDX to FLA

So, I'm sure nearly everyone saw that Hackster and I made a deal on his LS swapped 242. This will be my continuation of the build.

After 14 days is dismal sleep worrying about the shipping, I was greeted to this site yesterday morning 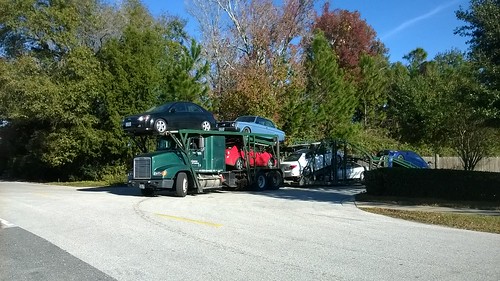 Judging by how it looked after coming off the trailer, I'd say it was top-loaded the whole way. Which is nice, as I didn't get dripped on from the other cars. It was pretty dirty from the trip though. No signs of burnt rubber on the rear flaps or quarter panel, so thankfully I guess it was un-hooned during it's travels.

Fired it up, and drove it home (had to meet the truck @ a Walmart parking lot giving him space to unload). Got it to the house, and wouldn't you know it, the water pump decided it hated life. Barely got 4 miles on it! Ha! Sean literally called me right when I had pulled into the driveway. He was as shocked as I was, but I told him not to sweat it, water pumps are an easy fix. Parts are on the way, and it will be back on the road this weekend.

I've already got plans for it. Get the coilovers on the front, order some parts from Kaplhenke, etc. Hope to get 5th gear fixed in the next few weeks. I have a Gen4 6.0 in the garage, but the more I think about it, I'm probably just going to cam the 5.3. I have a LS2 and LS9 cam in the garage as well, and one of them will get put in this motor. I'm going to try and make a HPDE event in January, but we'll see how things progress.

You bought a great car

What part of Florida?
H

Matt was a great buyer, good to work with and we had great communication.

I cant wait to see what you do with it but most of all I hope you enjoy it.

240injax said:
What part of Florida?
Click to expand...

240injax said:
What part of Florida?
Click to expand...

240injax, we must be close. I'm over in Orange Park, off College Dr.

Glad it made it safe!
B

Look up the specs for an LS7 cam, you might find it is the cam you want.
Just happen to have one that I pulled last week out of my 16k mile Z06.
PM me if you're interested.

Nice to see it still on TB

Took the car to the track this past weekend to get a baseline on how it feels and handles before I start my upgrades. The event was a HPDE hosted by my local Porsche Club chapter. I was surrounded by what seemed to be $1million of Porsche products. There were a half dozen Vettes, a few BMW's, Mini's, Miata's and one AE86. They stuck me with an instructor in the Green group (been some time since I've done a HPDE and with a new "ride", it is standard for this group to start you at the bottom. The car got a reasonable amount of attention, but after my first session on the track, it almost became the center of attention. It's hard to explain just how good this car sounds under load. It's pretty quiet just idling, but when you feed it, it comes alive. Being in Green group, I was speed limited, but I did manage to pass a few people on the front straight, but mostly, we were waiving people by. The car actually didn't do too bad, but I'm sure I wasn't giving it all it had, as I was trying to learn how it was going to act. Never once did it understeer. It has 235's at all 4 corners, so traction was a problem mid-turn and turn exits with the V8 torque. However, the car is very predictable, and slight changes in throttle angle gets it all back in order. I've got some parts ordered from Kaplhenke, and will be working on getting the rear fenders to where they will clear some 255's. The 6.0 will get put on the back burner until the summer. The 5.3 has plenty of power at this moment. Another track event in April, then if the moons align right, I may try and to the Ultimate Street Car Challenge in N. Carolina this July.

There was a photog out there this weekend, and I ordered my pics, but here is one they posted on their facebook page. I'll share a few more when I get them. 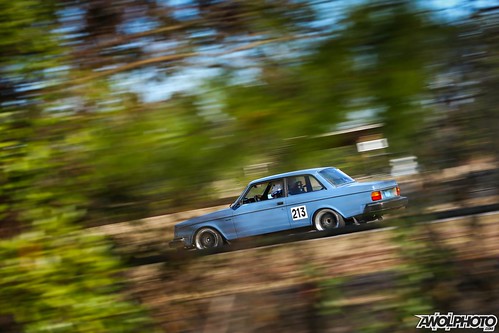 Drop the ass end (or raise the front is actually better for handling), install Kaplhenke's roll correction spacers, remove the rear sway bar and it will be a little better on a track. I can't remember if it has a 25mm front bar or not, but you should try to find a 25 or 28 front bar if it doesn't.

Get a set of 245 width DOT race tires for the track. Fitting 255's is no fun on a 242 where you are worried about the paint. Especially good ones that generally run wider than 255.
H

Had a stock front bar in the front when I shipped it out to him but I included a 25mm black powdercoated IPD bar zip tied to the seat mounts.

Glad to hear the car did well....I miss looking at it and yes, it sounds super mean on the go pedal.

Thanks for the update.

Pat,
I've got Ben's roll correction/steering quickeners already. I ordered the his camber plates & lux steer this week. Once all those goodies get here, I'll do it all at once (with coilovers). Then I'll have the adjust-ability on the front as well as the back. Still need to order the bushings for the 25mm front bar that Sean included. I'll keep my eye out for some 245's. I think, even with 245's, I will need to work on that rear fender lip some though.

Sean,
You put together a great starting point! I'm taking good care of it!

Updates on my progress. Things have been a little slow. Still trying to find gainful employment & we found out we have baby #3 on the way, which is awesome! So the past few weeks I finally got everything together for my from coilovers. These should go on next week. I am using KYB AGX adjustable inserts and 350# springs with a take-up spring. BNE's camber plates and roll correction finished off the top and bottom.

This pic shows the delrin spacer I am using under the insert to bring it up. 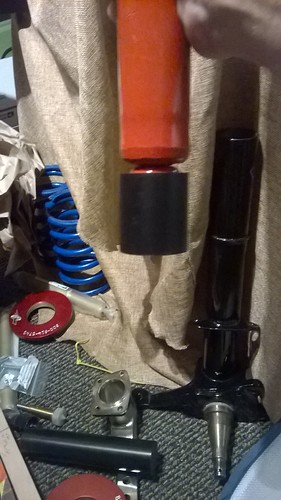 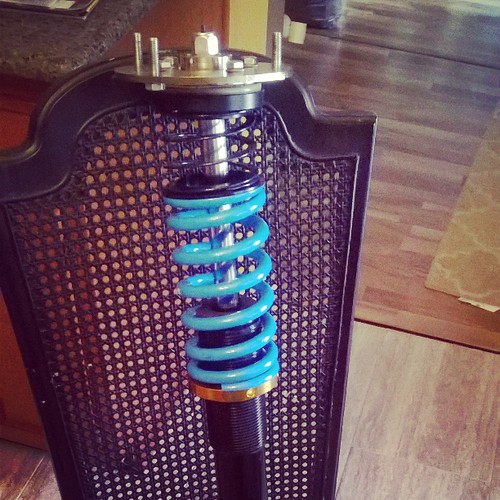 Also have a new set of rear lower arms I am boxing in. 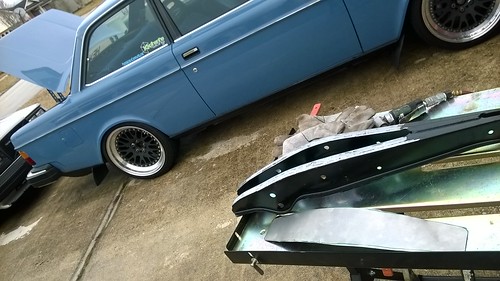 Went to a Euro show with some of the FL Volvo peeps. Parked next to this sweet old Volvo military vehicle 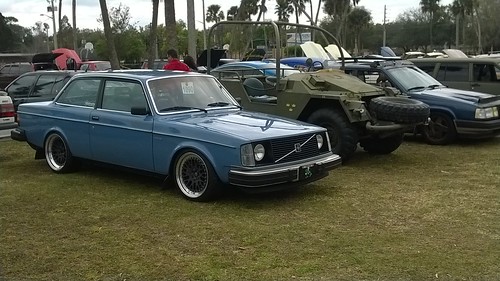 Lastly, this past weekend, I did a cam and spring swap in the LM7. In all stock form, Sean managed 277whp from the 5.3L. I put it on the rollers last night and my friend (local LS guru) hooked me up with a little tuning - final number was 325hp/310tq. Almost 50hp for just a cam and a Saturday. I was pretty happy with that. Best of all, it moved the torque up the rpm range. Prior to this cam, the car make around close to 250# at 2000 rpm, which just killed the tires. Now the curve ramps up with rpm (not a smooth as I want it to), but that should help some with the wheel spin coming out of the curves at the track. 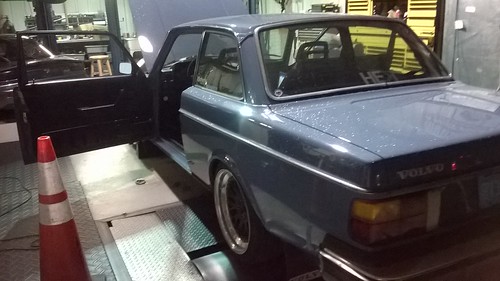 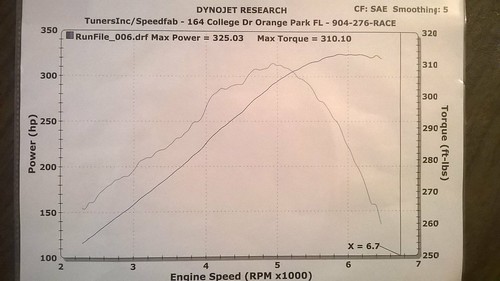 So, suspension should happen next week. Then it will be on to widening the rear fenders. Next track event is mid-April.

Any word on the part number and dimensions of that strut? Would love to know more about it!