For Autocross fans. Show your stuff!

For a heavy car like my Mustang, what are a couple different makes of tires you see working for a combination track tire, possible Autocross tire? I'm planning on running more track days and will likely buy another set of wheels so I can have something that will hold up. I will still have a set of RE71Rs for Autocross. They work incredibly well in that application. I'm not out to set top lap times on the tracks. Something that will last so I can do track days without spending a fortune on tires.

Hankook RS4s are your best bet, for certain. They're not going to be like the RE71Rs if going for fastest at the AutoX, but they're very good for a long long wearing tire that holds up to the track. I don't know what they have for tire sizes that are near your factory setup, but something close should suffice, I assume!
2

Thanks. I’ll look into what sizes are available and go from there. I don’t have to comply with any sort of rules for what I’m doing as far as track days. I’ll just find something that is appropriately sized for the car.

2manyturbos said:
Thanks. I’ll look into what sizes are available and go from there. I don’t have to comply with any sort of rules for what I’m doing as far as track days. I’ll just find something that is appropriately sized for the car.
Click to expand...

Best bang for the buck in my opinion is getting take offs from an SCCA world challenge team or some other similar series. Make friends with well a sponsored team and you will generally have no problem getting them for a reasonable price. I was paying on average $400 a set for practice take offs which were guaranteed 1-2 heat cycles with 75% depth or better. I ran dozens of track days and autocrosses this way over the past decade. One set would last a full auto x season and 1-2 track days. I was running 17's though as they were the most common size at the time. The spec Miata's were still running 15's then. 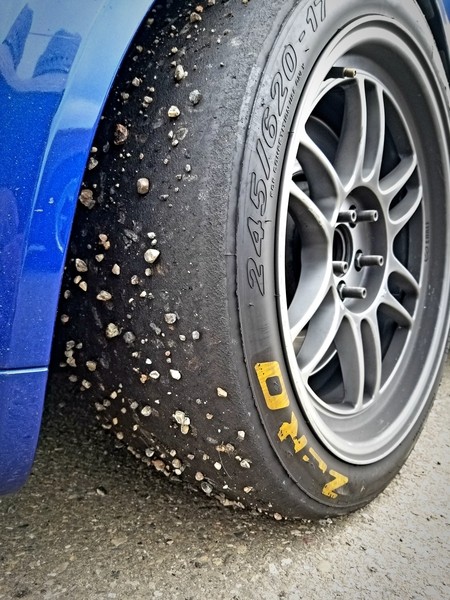 Good idea. It may be hard to find take offs in 19”. The brakes on the GT are so big it requires at least a 19” wheel to clear them.

You might have a tough time there, the biggest that I normally see are 18's but a lot of modern stuff runs bigger sizes, might want to check the 911 cup cars and such.

2manyturbos said:
Thanks. I?ll look into what sizes are available and go from there. I don?t have to comply with any sort of rules for what I?m doing as far as track days. I?ll just find something that is appropriately sized for the car.
Click to expand...

I understand, it's just that they are relatively cheap and last longer than most all of their competitors by a sizeable margin. Teams sometimes get more than 24-36hrs out of a set where the RE71Rs won't last 12.

I got in one event before the shutdown. I had to run in the morning group which was on cold, wet pavement that was akin to driving on ice. Smooth inputs were key to getting any kind of run at all. Very few cars in the morning group ran sub 60 second runs. I made 6 clean runs, the best of which was a 58.3XX run. By the 2nd run group the pavement was drying out and their times dropped 5-6 seconds over the duration of their session. It was that slick. Usually, the rain only accounts for a 2-3 second drop in times. The 3rd run group had almost completely dry pavement to run on and their times weren't much better than the 2nd group. After all three sessions were over there was enough time for fun runs and that's when the GT came into its own. My best run was a 53.032. That was running on Michelin Sport 4S street tires. My first time driving on these. It was too cold when I left at 6 AM to head to this event 2 hours away at PIR to run on my RE71s. It was 29 degrees out when I left. It took 10 minutes of running my car to get the 1/8" of ice to melt off of the glass. Since this event, everything has been canceled or postponed. Our next tentative event is May 16/17 at Dallesport Airport. I'm keeping my fingers crossed this one will actually happen. It's so bad professional auto racing has resorted to virtual racing. I'm not kidding. Here is my version of virtual racing for you guys.

Thanks. Have you guys gotten in any racing this season? I know there was at least 1-2 Lucky Dog races before the shutdown.

Nope. The first race in the Pacific Northwest was the end of this month. And it was canceled along with another race in California. Maybe at the end of May at Pacific, if we’re lucky! And hopefully we get the car done! LOL
2

As of last week racing has resumed in the northwest. This weekend I had my choice of 3 different events within reasonable driving distance. Two were in Washington, the one I picked to run at was at Hoodoo Ski Bowl near Sisters, OR. The setting there is awesome. It was a bit weird with the social distancing requirements, face masks, hand cleaner, 25 person cap on the event etc. All that said, it was nice to get back behind the wheel. Clubs are scrambling to get back on the track now that WA and OR are allowing events to proceed. Two of the clubs I belong to are having a combined event at Oregon Raceway Park on the 20th of June. It was originally scheduled for a month ago, however, the lock down required postponing it until June in hopes the restrictions would be lifted by then. Here is video of my best run yesterday. It's new front tire time. They don't stick anything like the used to. They were pretty much done at the end of last season after having the equivalent of ~ 150 Autocross runs on them.

Hackster is up in Washington running at Sanderson Field this weekend. I was registered for that event and then switched to the Hoodoo event when we got the go ahead to hold it.

Cool. Is that a 1963 Galaxie you’re driving? You have to post a picture of it in this thread.

Location
Driving the No Malarkey Bus

This was from Sunday, I need to find 3-4 seconds to catch the brand new Alfa Romeo Giulia that beat me in my class. If your watch to the end you'll see the tricked out Mini on Hoosier's A7's that got first in my class, it's the yellow one still in grid, if you watch an earlier video, 230 was my second best time, you'll get a better look when I pull back in grid.. I'm on 275/40/17 Falken Azenis 615+ 200tw. I'm definitely running out of RPM's in the faster parts in 2nd but I also need to tighten up on the cones. This course is much larger than our usual venue. The big valve head really woke up the TD05-20G, no lag like the T3/T4.

Did my first X at Keiser stadium in Oct.
Second event postponed due to the air quality.
See you at Evergreen Air Museum on Oct 4th? 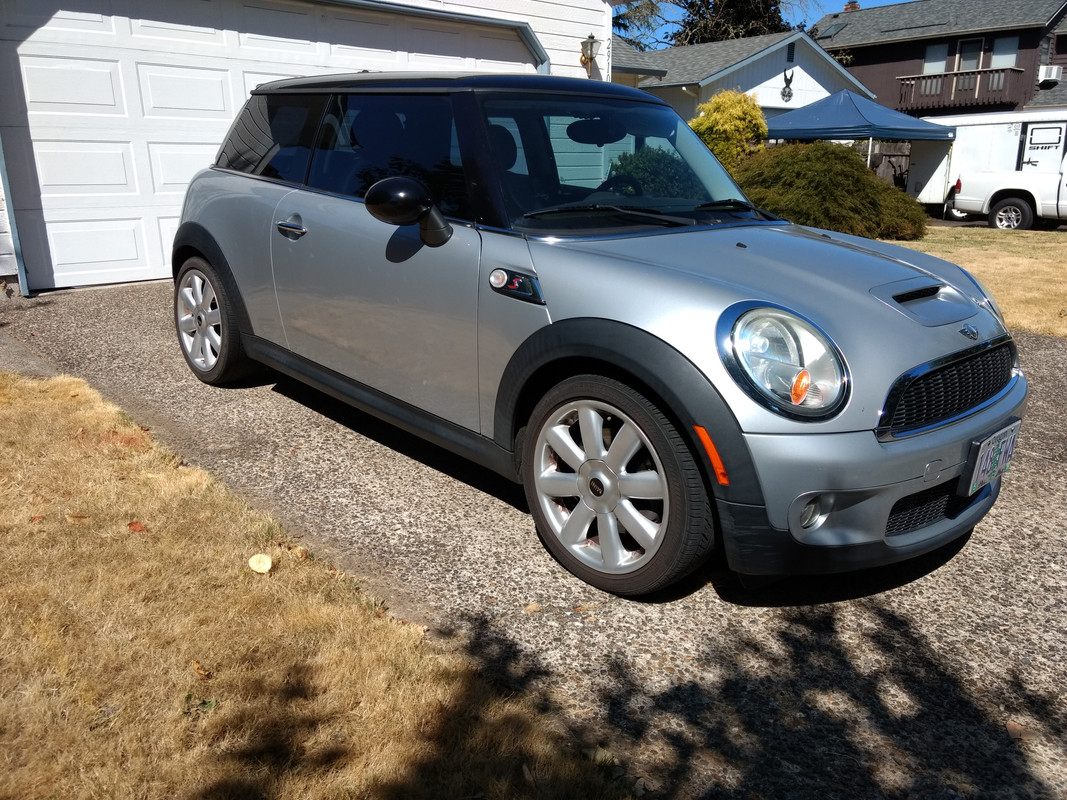 I remember seeing your Mini at that event. I love Mini Coopers. Such fun cars. I am registered for the Evergreen Aviation event that was cancelled. I don't know whether I will make the rescheduled Oct 4th event. It conflicts with SSCC's fall Enduro event at Jackson County Sports Park scale road race course. I haven't done that event since 2002 and am anxious to go run it again with a car with some power. If you are hooked on Autocross, you need to join my friend's Facebook page Pacific NW Autocross & Road Race Fanatics. He tracks almost all the club's events in the West all the way from Canada to So Cal. The clubs like to post their events to his page to advertise them.

BTW, that was a really tough course for your first Autocross. Even veteran Autocrossers were getting lost that day. A well designed course DOES NOT double back on itself. The limited space makes that necessary in order to have runs longer than 35 seconds. I hit a cone on 2 of my runs and missed a gate on my first run heading to the finish. I realized I missed it as I passed it.

This was my best run that day.

VB242 said:
This was from Sunday, I need to find 3-4 seconds to catch the brand new Alfa Romeo Giulia that beat me in my class. If your watch to the end you'll see the tricked out Mini on Hoosier's A7's that got first in my class, it's the yellow one still in grid, if you watch an earlier video, 230 was my second best time, you'll get a better look when I pull back in grid.. I'm on 275/40/17 Falken Azenis 615+ 200tw. I'm definitely running out of RPM's in the faster parts in 2nd but I also need to tighten up on the cones. This course is much larger than our usual venue. The big valve head really woke up the TD05-20G, no lag like the T3/T4.

Cool. What is that venue? A race track parking lot? The videos are a great training tool. Try not to let your steering wheel spin through your fingers. You only do it in a couple of places there. That's a habit carried over from street driving. It takes you a tenth or 2 to figure out where the car is pointing. That is not helping you set up for your next element. It's great to see some Volvos in action. You're right, you gave up a half a second on that back sweeper. Get the car slowed down so you can follow a much shorter path. It looks fast, it feels fast, yet, it takes longer to carry speed through a corner like that. A Cooper on A7's? The tires alone are worth 2 seconds compared to your 615+ Azenis. What class are you running in?

Location
Driving the No Malarkey Bus

Yes it's a parking lot at a drag strip outside of Richmond VA. I'm running Street Modified, this club has an X modifier for 200tw tires which gives you a little PAX bump. The Mini was about 7 seconds ahead of me. I was looking at the XAS class.
Last edited: Sep 16, 2020
You must log in or register to reply here.
Share:
Facebook Twitter Reddit Pinterest Tumblr WhatsApp Email Share Link
Top